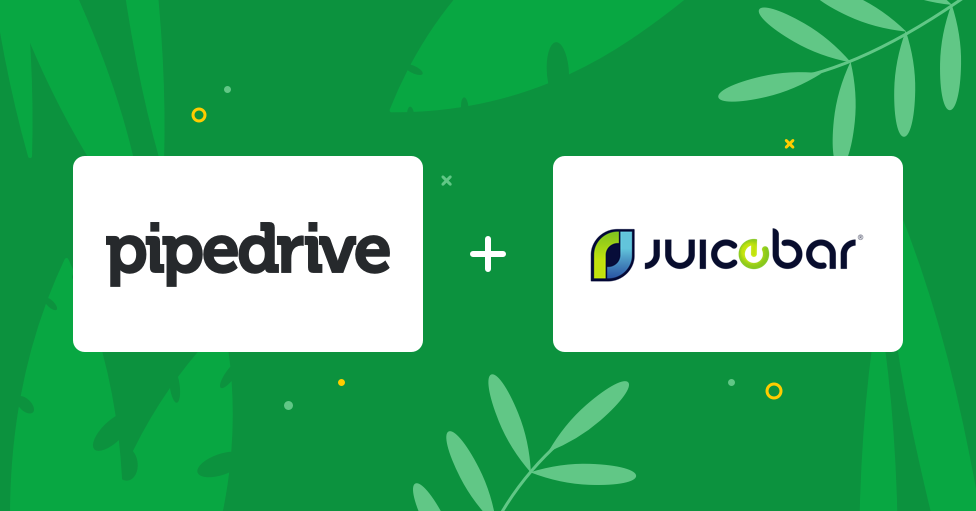 At a time when demand for their products is skyrocketing, JuiceBar relies on Pipedrive and the LeadBooster add-on to manage inbound sales opportunities, identify the hottest leads and automate their workflow.

JuiceBar is a full service provider for electric vehicle (EV) charging stations, manufacturing charging stations for businesses and property owners, and advising customers on the right EV charging solution for them.

The company now has 17 active seats on Pipedrive, having moved from Salesforce in May 2019 soon after Jackson joined. Originally on the Essential tier, the company upgraded to Advanced so that they could better manage the demand they were getting for their products and services.

The challenges JuiceBar faced before moving to Pipedrive

JuiceBar was using Salesforce when Jackson joined the company. He quickly realized, having used Pipedrive before, that it made more sense for the company to migrate their CRM to Pipedrive.

The company was facing a number of challenges:

“This all resulted in bad insights into our business, so a CRM set up for growth/success was non-negotiable.”

The company benefited from the simple migration process immediately.

“Pipedrive made this very straightforward with easy import tools and the ability to ‘undo’ data imports, large and small. It took about a week to deprecate Salesforce and another week or so to get pre-sales and sales activities logged correctly,” Jackson tells us.

How JuiceBar benefited from moving to Pipedrive

Once the migration was complete, JuiceBar began to see other benefits as well.

For one, the sales team was better able to maintain accurate and up-to-date data on their CRM.

“Pipedrive has built a SaaS tool with very intuitive data entry. I am consistently impressed with Pipedrive’s ability to walk the line between a rich data reporting backend and simple user data entry. Pipedrive does a good job of threading the needle between those two things, asking for fairly few data fields from the actual users and spitting out very detailed back-end data you can verify and work with.”

JuiceBar is using Pipedrive’s custom fields and important fields (available to users in the Advanced tier and above) to enrich their data even further, constantly working to find the best data points for their needs.

This has helped them to refine exactly which leads they should be targeting and how to target them.

“It’s always a work in progress and you’re always sort of experimenting,” explains Jackson. “For instance, we started focusing on titles, so that can affect our marketing and we can really do a better job with our demographics on the front-end of the business by knowing who is buying, who is buying faster, who has what objections based on title.”

Another feature available to the Advanced tier and above is the ability to add workflow automations in Pipedrive.

“The Automations features prevent double-work and ensure data accuracy across the sales and fulfillment process. It has saved us hundreds of hours of data-entry.”

The company has also been using integrations to supplement the wide array of features available on Advanced.

Livestorm and Zapier are two of the integrations Jackson is most enthusiastic about.

“We have had great success with Livestorm Webinars as an educational resource and sync these viewers with our contacts and deals to enrich sales conversations,” he tells us. “We also use Zapier for more complicated workflows from cold email to landing pages and beyond.”

The LeadBooster add-on is providing JuiceBar with more vital tools

JuiceBar’s team is using Chatbot, Live Chat and Web Forms to generate and qualify more leads, helping them to narrow their focus on the best prospects coming into their funnel.

Before adopting LeadBooster, they didn’t have the tools they needed.

“Our website leads HTML contact form left some opportunities on the table,” says Jackson. “We were in contact with prospects who were farther along in the sales process and suffering from decision confusion. We wanted to help prospects get clearer answers sooner.”

“The addition of the LeadBooster tools allows our sales team to move earlier in the sales process and engage prospects in the consideration phase. Because our chargers are a far better value than our competitors’, we can often simplify and shorten the sales process for the customer.”

LeadBooster has been a simple addition to JuiceBar’s website and has driven some real growth for the company.

“Chatbot was an easy bolt-on to our website and has increased hit-to-lead conversions by almost 100%,” reveals Jackson. “Live Chat has been the source of several on-the-spot valuable opportunities.

“Clear, integrated Web Forms have transformed this other side of our business, which is the wholesale-distributor-reseller program. From requiring a 1:1 rep to sales conversation touch to a 2:1, 3:1… We can break the scaling a little bit.”

Jackson is also looking forward to trying out Prospector in the near future.

Measuring the benefits of Pipedrive and LeadBooster

Pipedrive, the LeadBooster add-on and the key tools JuiceBar has integrated with the CRM are helping JuiceBar to manage the exceptional demand for their products and services.

“We’re one of the few American-based companies that build EV-charging stations for commercial properties, big HOAs, residential, and we are at the crest of an insane wave around EV (Electric Vehicle) adoption,” Jackson explains.

“Our business has become incredibly prescient, and if you look at what’s happening with EV charging, everyone is dealing with a massive influx of the sales conversations around it, and so were we to try to do this with old tools, we would be in a lot of trouble right now,” he continues. “Being able to scale, able to break that 1:1 ratio, being able to handle multiple sales conversations per day, per rep, is a non-negotiable given what’s happened to our industry.”

“Pipedrive has allowed us to massively scale our outbound activity with a minimal increase in admin work to support it. Our Sales Cycle has been cut in half in 18 months, from approximately 70 days to 30 days.”

If you’re new to Pipedrive, you can try our Advanced tier free for 14-days.

Crush Your Manual Admin With This Sales Automation Guide