How Nirmal Web Studio increased sales by 50% in a year

Nirmal Web Studio is a boutique web design agency based in Sydney, Australia.

By integrating Pipedrive and Prospect.io, Nirmal Web Studio increased sales by 50% in a year.

Percentage sales increased in a year

Number of team members at Nirmal

Before Pipedrive and Prospect.io, Managing Director Nirmal Gyanwali and his team were drowning in admin tasks, spending their days manually searching for contacts on LinkedIn and the web. Because the information wasn’t shared, the team often contacted the same person twice.

They didn’t have any lead qualification methods in place either, resulting in thousands of leads to approach, many of them unsuitable, and a lot of mistakes. The lack of coordination resulted in missed opportunities.

In a competitive industry like web design, every minute counts and even the smallest mistake can cost you a client. A lost client in our industry isn’t just a one-off loss. Customer lifetime value is crucial as we typically work with our customers for two or more years. 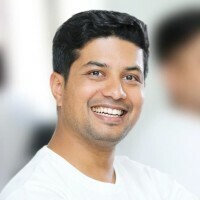 To manage qualification data for sales and marketing

To save time and streamline the sales process

It’s one of the best tools I have ever used for CRM. Simple and easy for anyone, regardless of the industry, it is the best tool to manage your clients. You have all your contacts there and you can easily integrate it with your phone and inbox to have access from anywhere. I had two people Googling and then they sometimes found the same people, with Prospect.io we can just have leads generated then automatically put in Pipedrive.
It gives us an advantage in many ways. The web design industry is a very competitive place because of globalization and offshore companies, some of which are very good. We are trying to stand out as a boutique agency and offer local solutions, which is how Pipedrive and Prospect.io have helped so much. Without them, I can't imagine how we would find leads in our local area and get in touch with them so easily.

Nirmal came across Pipedrive, which is a great CRM for consultants, and was quickly drawn in by its simplicity. Using multiple pipelines, he and his team were able to identify the key activities in their sales process, something that wasn’t defined before.

In addition to having a clear overview of the deals in play, as well as who in their team was contacting who, Nirmal made use of Pipedrive features like the Scheduler to organize meetings. In Australian business culture, meeting face-to-face is essential, and Nirmal was able to book more meetings very quickly

Pipedrive transformed Nirmal’s sales process by keeping all the information he needed in the app. As he could store audio notes on sales meetings and access detailed Caller ID for leads, Nirmal suddenly had a lot more time to focus on closing deals.

Organizing their workflow was just a part of Nirmal Web Studio’s struggles. Nirmal realized that their lead generation activities consisted of repetitive tasks that, he figured, must be automatable. That’s when Nirmal found Prospect.io, a tool that could manage qualification data for sales and marketing and be integrated directly with Pipedrive.

With Prospect-io, Nirmal was able to build highly specific lists and segments according to his criteria and feed them with prospects, which transformed the way he and his team approached leads. Instead of dropping leads into Pipedrive, he would go through a checklist based on qualification data, then pre-qualify leads after interacting with them.

Since introducing Pipedrive and Prospect.io to his team to help nurture leads in a structured way, Nirmal has seen sales increase by 50% in a year with domestic and international clients in Sydney, Brisbane and Melbourne, as well as Singapore, the United Kingdom, New Zealand and Switzerland.

He no longer defines deal stages manually and automated emails are sent out whenever a lead is moved to a new stage. Thanks to Pipedrive and Prospect.io, Nirmal Web Studio went from 20 to 250 outreach emails a day.

You can use many channels to acquire leads and you want to make sure the channels you use are diversified. To find the right people takes effort, so when you automate the repetitive stuff, it saves you a lot of time. Pipedrive is the best tool I’ve ever found! From email tracking to workflow automations and game-changing integrations, Pipedrive has plenty of features that help us go beyond our sales targets. With all the information I need in one place, I’m able to manage a growing team of salespeople as they take on new markets in one of the most competitive service industries in the world.